HILDA AND THE MOUNTAIN KING

Hilda and the Mountain King is an epic 80-minute movie adapted from Luke Pearson’s celebrated graphic novel. It picks up where the shocking cliff-hanger ending of Hilda Season 2 left off, finding Hilda stranded in troll country with the body of a troll. Her quest to change back into her human form and reunite with her mum and friends brings her deeper into the world of trolls: their customs, their cuisine, and their legends; namely the infamous Mountain King. Meanwhile, as tensions rise between the gathering trolls and the city of Trolberg, Hilda’s mum scours the mountainside desperate to find her daughter before the conflict erupts into a full blown war.

HILDA AND THE MOUNTAIN KING 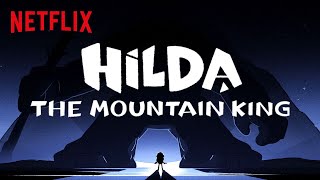 THE MITCHELLS VS THE MACHINES