Sony Pictures Television has partnered with the Geena Davis Institute on Gender in Media at Mount Saint Mary’s University to celebrate the talented women at the helm of our series. The Geena Davis Institute is the only organization working collaboratively within the entertainment industry to engage, educate and influence the creation of gender balanced onscreen portrayals, reducing harmful stereotypes and creating an abundance of unique and intersectoral characters in entertainment.  If you can see it, you can be it. 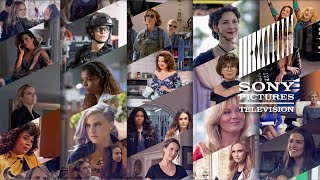